A Major and Critical Component

After the crankcase, the crankshaft is the most expensive single component in a large diesel engine and one of the largest. It is subject to extremely heavy loads and stresses, particularly during the compression and power strokes of the engine's operating cycle. The stressing loads are not only on the main journals and crankpins but also on the webs connecting them. Stresses can also arise from torsional vibration, although counter-balance weights and vibration dampers are attached to crankshafts to eliminate such stresses or keep them within acceptable limits. The demands made of crankshafts are that much greater in the case of Paxman diesels which are high-speed types, designed for high power outputs from engines of minimum weight and size.

To achieve long and reliable service life the quality of forging, subsequent machining and hardening all have to be of the highest standard. Crankshaft failures are an expensive business, not solely because of the cost of the component itself. Failures are likely to result in major damage to other expensive components such as connecting rods and bearing blocks and, sometimes, even the crankcase. Substantial time, trouble and expense are involved in the major engine disassembly and reassembly necessary to replace a crankshaft. Then there are the costs and inconvenience of down-time which can be lengthy due to the lead time required for manufacturing another crankshaft if one is not available from stock.

The manufacture of crankshafts is a highly specialised business and for its diesel engines Paxman has always bought in either crankshaft forgings, which it has then machined and hardened in-house, or fully machined crankshafts.

For its early diesel engines, built in the latter half of the 1920s and during the 1930s, Paxman sourced crankshafts from Clarke's Crank & Forge Co Ltd (established 1857) of Lincoln. That is fully understandable. Both Paxman and Clarke's were 'associated companies' within Agricultural & General Engineers Ltd (AGE) until that combine collapsed in 1932. The crankshafts of early Paxman oil engines were of very substantial construction but weight was not a concern in the design of stationary engines. Weight was also less important in these engines because they ran at much lower speeds (260 to 500 rpm) compared with later types. Clarke's Crank & Forge, like Paxman, survived the AGE crash. It continued in business until 2003 when it closed following a major fire in the Works.

At present we have no firm evidence as to who manufactured crankshafts for the over 3,500 Paxman 12TP engines built during World War 2. The sourcing of all components was arranged by the Ministry of Supply (MOS). Ray Roxby recalls that the normal practice of the MOS was to have at least three suppliers of each component, to ensure continuity of supply if a factory was bombed. Assuming that practice was followed, Ray thinks the suppliers of crankshafts for the TP were probably Ambrose Shardlow, Mitchell Shackleton and English Steel. (Paxman's responsibility was the design, assembly and testing of TPs.)

Crankshafts for RPH and YH engines:   From the late 1940s until at least the mid-1960s (and possibly later) the mainstays of the Paxman diesel business were the 7" bore RPH engine and its direct injection successor, the YH. The crankshafts for these two engine ranges were basically the same. Don Meiklejohn recalls that at one time Ambrose Shardlow of Meadowhall, Sheffield was a major supplier of crankshafts and their forgings to Paxman. Shardlow probably supplied most of the crankshafts for RPH and YH engines in the 1950s, 1960s and 1970s but the numbers gradually diminished as production of these engine ranges wound down. When the RPH and YH were in production (and for several years after), Paxman had its own facilities in No 1 Machine Shop for machining crankshafts. Don recalls that the Company tended to machine as many forgings as its capacity allowed and then buy in the remainder as fully machined shafts.

Tony Hall, who retired from Ambrose Shardlow after almost 40 years service, recalls working on Paxman, Dorman, English Electric and Napier crankshafts. In the 1950s and 1960s Shardlow employed 2,200 people. As at January 2008 the business is owned by Bifrangi, an Italian company, and employs just over 200. An all too familiar story of a once great British engineering business now much diminished in size and under foreign ownership.

Pictured above is the crankshaft of a 12 cylinder RPH.

Ray Roxby recalls that crankshafts for the RPH engine were also supplied by English Steel and Mitchell Shackleton & Co of Patricroft, Manchester. Both were major crankshaft producers. Founded in 1887, Mitchell Shackleton was placed in administration in 2003 when all the plant was sold off.

Crankshafts for VENTURA engines:   The Ventura was formally launched in 1960 and it is thought that Ambrose Shardlow supplied most of the earlier crankshafts for it. Later in the 1960s Paxman decided to go to nitride hardened shafts for this engine range. It therefore went to Alfing Kessler in Germany for some of these as Alfing was an experienced supplier of such shafts. The decision to adopt nitrided shafts also led to Paxman installing its own nitriding facilities on the Hythe Hill site. A key person in introducing and developing the use of this technology at Colchester was the late Syd Child, Paxman's heat treatment expert at the time.

Crankshafts for VALENTA engines:   The Valenta was introduced to the market in 1972, two years after its initial test running. Don Meiklejohn's recollection is that Ambrose Shardlow was unable to supply the complicated crankshaft for the 12 cylinder version. This was a larger diameter than the Ventura shaft and probably beyond Shardlow's forging capacity. One should also note that the shaft for the 12 cylinder engine is forged complete from one billet, in one die, in one operation. Although shafts for larger engines are also usually forged from one billet, they are formed in a number of operations to produce one crankpin at a time. Ambrose Shardlow did supply some forgings for 16 cylinder Valenta crankshafts which had a simpler pin arrangement. 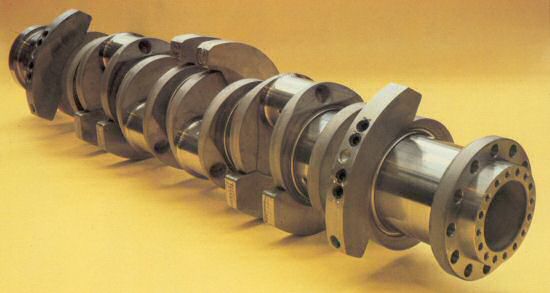 Crankshaft for the Valenta (Y3J) Engine

All crankshafts for 12 cylinder Valentas have been forged by Alfing Kessler. Paxman did initially machine some of these forgings at Colchester but later bought in all of them fully machined. It has been suggested that suppliers became increasingly reluctant to provide only forgings as it was the subsequent machining which provided sufficient added value to make the work commercially attractive. Alfing became the supplier of other sizes of Valenta shafts with the eventual result that Paxman gradually ran down and eventually lost its crankshaft machining facilities which never moved out of No 1 Machine Shop. Alfing continues to supply spare crankshafts for the Valenta engine range.

Note the greatly increased size of the main journals and crankpins on the VP185 crankshaft
pictured here, compared with those of the RPH crankshaft shown earlier. The larger journals
are necessary to withstand the much heavier loads imposed on them.

When the VP185 was being developed, Paxman explored the possibility of using induction hardened, instead of nitrided, crankshafts to reduce cost. The induction hardening process resulted in some bending of shafts which Alfing was then able to straighten using a sophisticated computer-controlled peening process. However, the latter introduced some stresses which differed in each crankshaft. Nigel Ramsden, Paxman's Technical Director at the time, considered that consistency of quality was essential because of the high loads on the shaft and it was therefore decided to continue with nitride hardened shafts as used on the Valenta.

Special features of the VP185 crankshaft include: 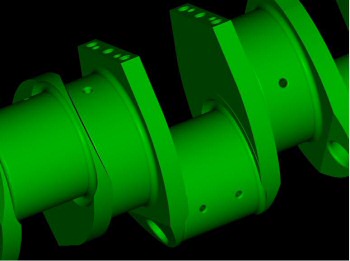 One difference between VP185 and Valenta shafts relates to the connecting rod configuration. On the Valenta shaft the fillet radii are undercut on the journals and plain on the crankpins. On the VP185, this is reversed, with the pins being undercut, and the journals having a plain fillet. The explanation for this is that because the VP185 has side by side connecting rods, the big end bearing area is much more critical than with the Valenta's fork and blade arrangement. With the latter the fork rod bearing spans the whole length of the pin, not just half of it. To the right is an illustration of a section of the VP185 crankshaft showing the undercut fillet radius on the crankpin.

Up to the mid-1970s RPH and YH crankshafts, and a smaller number of Ventura and Valenta ones, were bought in as forgings and machined in No 1 Machine Shop at Standard Works before being heat treated in-house. After this time Ventura and Valenta crankshafts were bought in fully machined as, has been mentioned previously, the supplier argued the contract was not economically worthwhile without the additional work. Paxman continued to buy in crankshaft forgings for RPH and YH engines until about 1982. These were first turned and then put on a 'pinner' to turn the crankpins. A further operation was drilling the oilways with a gun drill. The final machining operations, before hardening, were grinding and polishing. After 1982 all crankshafts were bought in fully machined but grinding and polishing of crankshafts for the Repair & Overhaul and Development Departments continued until about 1988. Three people heavily involved in this specialised work were Doug Rudkin on the Churchill grinder, and the Blanc brothers, Terry and John.

Ray Roxby recalls that RPH and YH crankshafts were not surface hardened, but were oil quenched and tempered.

The other main process, the one mainly used by Paxman, is nitriding. Although more expensive than induction hardening, it has the advantage of being a relatively low temperature process with minimal risks of component distortion. The crankshaft is heated to a temperature of about 570°C in an atmosphere of 'cracked' ammonia gas for several hours. During this period the steel absorbs nitrogen from the ammonia and forms a hard surface of iron nitride. In the 1960s a large Birlec "Top Hat" furnace was installed at Standard Works, first for nitriding Ventura crankshafts and then also Valenta shafts when that engine was introduced. As already mentioned, crankshafts are now bought in fully finished with the nitriding having been done by the supplier.