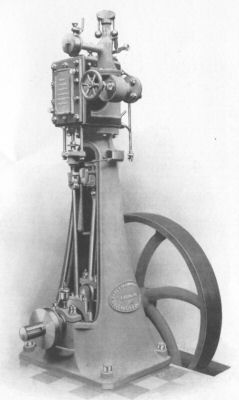 Paxman's Standard Vertical steam engines were direct descendants of its earliest vertical engines. This is evident from the photographs of the surviving 1877 and 1890 verticals shown on the Steam Engineering page. For customers requiring only a modest power output, the SV range had the attractions of being a well-proven and relatively simple design which needed little floor space for installation compared with a horizontal engine.

The description below and specifications given in the two tables are taken from a Paxman catalogue thought to have been issued in late 1913 or in 1914. From the second table it can be seen that at this time, for "Electric Light Work" (i.e. electrical power generation), the engines could be run at faster speeds, producing higher power outputs.

Class SV engines also feature in catalogue 741, Power Plant for Laundries, from which the picture shown here is taken. In this catalogue, dated 1926, the speeds and power output ratings given for General Purposes are the higher ones which had previously been quoted for Electric Light Work, as in the second table below.

… our class "SV" vertical engine, … is self-contained, and of the most substantial design. The engine frame or standard contains the crankshaft bearings, and the upper portion of this frame is bored to form the working path for the crosshead. In the two larger sizes, the two sides of this panel are braced together by a cross-over panel in each opening.

Cylinder.   The cylinder is of close-grained cold blast iron, lagged with non-conducting composition, and covered with sheet steel. The steam distribution is effected by a single slide valve, under the control of a variable expansion eccentric, by means of which the cut-off may be varied from time to time in proportion to the power required to be given off by the engine. This eccentric sheave is also arranged so as to form a simple reversing apparatus.

Working Parts.   The piston rod, slide-valve rods, crankshaft, and connecting rod are of the best quality mild steel. The principle working parts are made adjustable, but the surfaces of the parts are so large that wear is almost entirely eliminated so long as the proper lubrication of the engine is attended to.

Lubrication.   Continuous lubrication is provided for all working parts, so that these engines are well adapted for long runs, and they can be left for many hours without attention.

Fittings.   The Fittings supplied with these engines comprise : Stop valve, cylinder drain cocks, lubricating boxes, sight drop lubricators, spanners, and all other accessories for the proper working of the engine.

Feed Pump.   A feed pump, worked by an eccentric from the crankshaft, can be supplied at an extra charge if required.

Engine and Boiler Combined.   … the "SV" vertical engine (can be) combined with a vertical boiler, either of the crosstube or Essex patent type, mounted on one baseplate, making a very neat and compact arrangement, of which we have supplied large numbers for various purposes.

Engine and boiler can be mounted on four wrought-iron wheels to facilitate transport, if required.