Paxman's Semi-Fixed engine, later known as the Undertype, normally consisted of a locomotive type boiler with the motion located under the boiler barrel. The design of the motion was derived from that used on the Company's portable engines. The Undertype was offered in single cylinder, double cylinder (i.e. duplex), and compound versions. Its general arrangement made for a compact power unit as explained below. The following description and specifications are taken from a Paxman catalogue thought to have been issued in late 1913 or in 1914.

The "Undertype" class of engine and boiler is especially adapted for situations where it is not practicable to put down expensive foundations, and the only fixing necessary with this type is of a very simple character. The engine is fixed underneath the boiler, ensuring great steadiness and compactness. This type of engine and boiler is well suited for export, especially when one considers the ease with which the various parts may be taken to pieces and packed in separate cases.

In the case of the compound type, in the smaller sizes, the engine is mounted on a strong channel-steel frame, … , but in the larger sizes (25 nhp and upwards) they are built on a cast-iron girder frame, bolted together in parts, … , which facilitates transport and repairs. 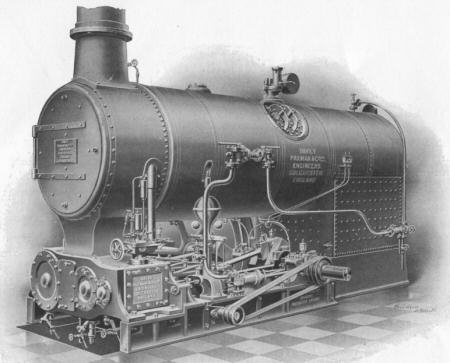 Cylinders.   The Cylinders are placed side by side. In the 25 hp size and upwards, the main high-pressure valve is of the piston type.

Automatic Expansion Gear.   This gear is fitted to the high-pressure cylinder, directly controlled by the governor, ensuring a great economy in steam consumption. The governor is of improved design, and controls the speed of the engine perfectly. When engines are required for electric-lighting purposes, two driving belts are supplied for driving the governor.

Boiler.   The Boiler is of the locomotive multitubular type, constructed in accordance with the best railway practice, and is more fully described in our Boiler Catalogue. Both engine and boiler in the compound type are suitable for a working pressure of 140 lb per square inch, the boiler being tested by hydraulic pressure to 240 lb per square inch, and a certificate of test is supplied if necessary.

Condenser.   Where water is easily obtainable, we strongly recommend the addition of a condenser, by which means either the power of the engine will be increased about 10% to 20% with the same consumption of fuel, or it will be possible to obtain the powers mentioned in the table, with a proportionate decrease in steam consumption.