… our "Colchester" compound engine, … being exactly the same design as the one used under the locomotive type boiler in the Undertype arrangement (described earlier in this catalogue). These engines are made in all sizes up to 60 nominal hp, for boiler pressures up to 140 lbs per square inch, and they are an excellent type for situations where a simple and economical engine is wanted, not requiring skilled attendance. Such an engine possesses the additional advantage of being a slightly cheaper design than the coupled compound steam engine, and it can be close packed to facilitate transport. It is the type invariable adopted for the main drive on gold dredgers, and these engines are on this account occasionally designated "Dredger engines". We have supplied many hundreds of this design to all parts of the world.

The smaller sizes of engines, from 8 hp to 20 nominal hp, are built upon a strong and neatly designed channel-steel frame; but the larger sizes, 25 nominal hp and upwards, are built … with cast-iron built-up girder frame, having its several parts bolted together, which can be taken apart to facilitate transport. 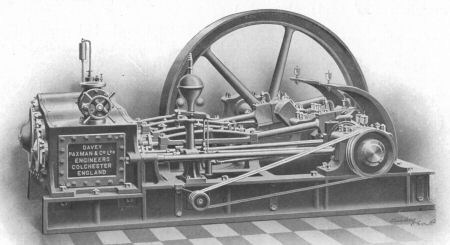 Crankshaft.   The Crankshaft is of mild steel, sufficiently long to take a pulley on the opposite end to flywheel if required. The cranks are at right angles, and the shaft runs in three substantial bearings.

Feed Pump.   At an extra charge, the Colchester type of engine can be fitted with a continuous-acting feed pump, fitted with gunmetal valves and seats, and driven by an eccentric from the crankshaft.

Automatic Expansion Gear.   This gear is fitted to the high-pressure cylinder, by which means it is possible to secure the best economy in the consumption of steam when running with varying loads.

Lubrication.   Great attention has been paid to the adequate lubrication of all wearing parts. A sight-feed lubricator is provided for the high-pressure cylinder, wiper lubricators for oiling the crankpins whilst the engine is running, and drop-feed lubrication to all bearings.

Flywheel.   The engine is fitted with one heavy flywheel, suitable for giving off the full power of the engine, turned on face to receive driving belt. Unless otherwise ordered, the flywheel is arranged to run "out," so that the top of wheel revolves away from the cylinder, looking at the engine from the cylinder end.

Condenser.   We would refer clients to our previous remarks as to the advisability of installing a condenser when water is easily obtainable, as by this means it is possible to increase the power of the engine by about 10% to 20% with the same consumption of steam, or it will be possible to obtain the powers mentioned in the following table with a proportionately decreased consumption of steam.